If the last year has had any health and diet message it is that sugar is bad. White sugar is the worst, maybe just after artificial sugars, Agarve seems not to be the healthy substitute it seemed to be and honey is good but now feels very breakfasty (porridge, granola, yoghurt etc.). I swear off sugar more than any other “vice” but I just can’t quite stay away! I try not to feel bad as I seem to be in good company, Indian texts and myths are full of stories of the gods having their favourite Indian sweets. In fact, most prayer ceremonies have something sweet as part of the offerings. If they couldn’t resist, what chance do I have?

If you are like me and have a sweet tooth, it might be time to buy some jaggery. Jaggery is the unrefined product that comes from sugarcanes, harvested in these months. The process of making jaggery is comfortingly old-fashioned. Sugarcanes are pressed through traditional juicers to extract every last sweet drop of juice from its very fibrous cage. This is then heated (often by burning the dried wasted fibres and skin of the sugar cane) and stirred pretty constantly as it thickens and then solidifies. It is then set in moulds. You can find it in liquid and powdered form but is mostly found in blocks.

It is unbleached and unrefined and the resulting colour is anything from yellow-beige to a deep golden brown. It may not look like sugar as we know it but is equally sweet and with a flavour somewhere between molasses and caramel. It also has many naturally occurring minerals such as iron, potassium, magnesium, calcium and is known as medicinal sugar in India. Ayurvedic texts say that jaggery strengthens the nervous system, prevents anaemia and promotes bone health. It is also thought that jaggery is good for digestion, really good for keeping the bronchial tracts clean (good for asthma sufferers), a good cleanser for the liver and also apparently, really helps prevent acne (communities who eat jaggery regularly apparently don’t get acne).

Health factors aside, jaggery is loved for its complex sweetness. It is used to sweeten Indian mithais. It is also stirred into homemade puddings and even in some savoury dishes. There is also a whole genre of North Indian sweets called gajak which are a variety of nuts and seeds coated in melted jaggery and set in sheets or rounds discs. It can be a simple product but has also become an art from with the best ones being both chewy and crumbly at the same time. I often bring some back from a trip and eat some after a meal.

When buying jaggery, I prefer darker versions as I feel they have a better flavour and seem better quality. These can be quite solid so to get little nuggets off, I grate or slice little pieces off with a sharp serrated knife. Store in an airtight container. It is a really versatile sweetener, you can add it to tea, stir into porridge, use in baking although it requires a little experimentation. I often make a big batch of jaggery-coated walnuts and keep them in an airtight container to munch on as a snack, add to breakfasts or sprinkle over a dessert for added texture and flavour.

It is not a guilt-free sweetener but it is as close as it gets! In fact, one would even say a nugget of jaggery a day keeps the doctor away! 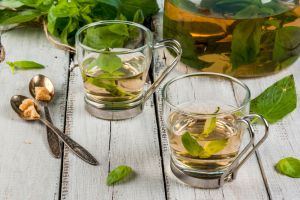 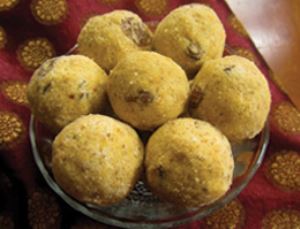 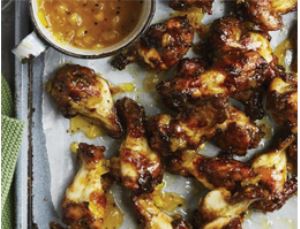 Chaat Magazine has featured Anjum’s recipe for sticky barbecue chicken wings using our original mango chutni as a cheat, so- click here for the recipe and if you need some BBQ inspiration!